The [S]cream is a diode overdrive that develops the potential of the classic little green box.
Its grit comes from the TS9, but without keeping centered on the medium :
The [S]cream is able to approach the sound of 1975-85, evoke the nervous grain of a Black Face, or produce a more contemporary overdrive…

The Tube Screamer® family were a turning point in the late 70s, and remains a reference.
The narrow bandwidth made it possible to overdrive the most shrill amps without breaking one’s ears. Furthermore, especially since pure nickel strings became rare, skinny guitars could get some dense colours again.

However, its limits in treble and bass could be frustrating in some cases : Lack of clarity with humbucker or archtop guitars, lack of bottom for heavy strings lovers.
I developed my own TS9 by thinking of these critics, and while respecting the original genius of the little green beast. 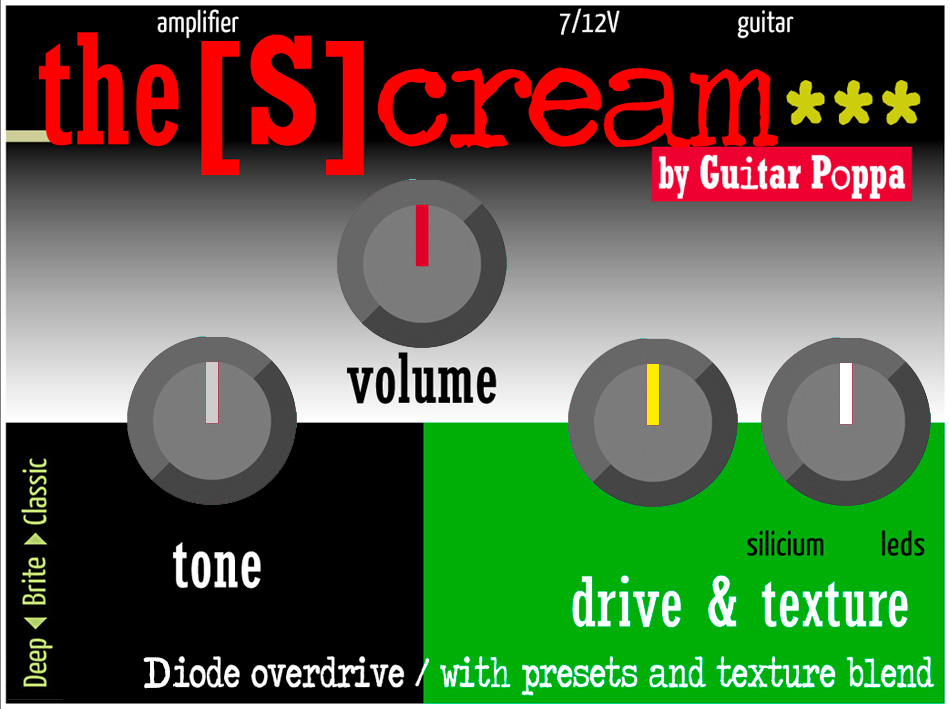 How to choose your overdrive circuit option

View of the JRC4558D, and of the network of silicon diodes and LEDs which determinate the saturation shape. The purple connection leads to the “Texture” potentiometer which mixes the effects of diodes and leds.

Choose this combination to play in the rock and blues traditions.
The Texture control lets you pan between the overdriven and airy sound of the 90s/2000s and the more compressed vintage grain of the 75s/90s.

• The high saturation threshold of the LEDs (1.5 to 1.8V) causes an incisive and dynamic sounding, with the color of the instrument persisting well under the drive.
• Silicon diodes cause a more compressed dynamic (0.6V) and a thicker grain due to their more quick coming into saturation.
• The Texture control mixes these two effects and, for a given Drive level, brings out various nuances of grain and harmonics.

Choose this combination to get warm material, less based on a crunchy effect than on complex and spicy textures…
It is suitable for dense or dirty musics such as in Deep Blues, Stoner or Independent Jazz…

• Zener diodes provide the same headroom* as LEDs, but with a more gradual coming into saturation, without scratching the ear. The sound material is at the same time dynamic, tight and rounded, even darkened.
• The silicon diodes will reduce the dynamics, while bringing harmonics which become embedded in the sound material and make it denser. ..